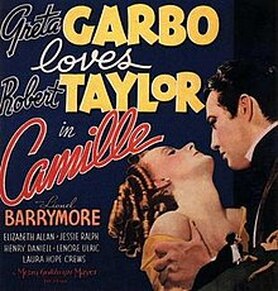 Marguerite Gautier, a world-weary, jaded courtesan at the top of Paris' demimonde of 1847, falls in love with Armand Duval, a promising but poor younger man who has worshiped her from afar for a long time.

She cautions him against the relationship and still maintains ties to her financial benefactor, Baron de Varville. Knowing she is dying of consumption, she decides to get whatever happiness she can with Armand but is convinced by his father to give him up since their relationship will never be accepted by the society of the period and being involved with him will doom his chances for success.

Sacrificing her happiness for his sake, she pretends to spurn him, but they reunite as she is dying, Armand realizes that what she did was for his good. She dies happily in his arms convinced she did the right thing.

CAMILLE is one of my favorite movies of all time, mainly because it contains what I consider to be the finest performance ever done by one of my greatest idols, Garbo. She is unlike any other star in movie history and stands alone, not to be compared with anyone else.

I was fortunate that CAMILLE was the first Garbo film I'd ever seen since it is her masterpiece, one that all her previous roles prepared her for. Her subtle, nuanced, incredibly precise performance and the interplay between her features and voice represent screen acting of the highest order. She is the only actress I know of who can play so many things at once: self-indulgent, yet kind and generous; perceptive and self-aware, yet impulsive and capricious; hot and passionate, but when necessary, cold as stone; intensely feminine and strangely masculine at the same time. There are scenes where she could be a thousand years old or a girl of eighteen.

Tough, fatalistic, with no illusions about what she is, but never bitter, she falls recklessly and heedlessly into a passionate love, defenses down and vulnerable. Because she underplays exquisitely, the most potentially trite plot contrivances become moments of great drama and feeling.

She is helped immensely by director George Cukor's light, sure touch and attention to detail, and seems quite confident in the role. In life, intensely shy, insecure, and inhibited (but paradoxically, steel-willed and self-possessed), she responds well to Cukor's knowledge of women and sense of taste, as other actresses have done as well.

The dialog, set and costume design cinematography and supporting cast are also top-notch, except for the always heavy-handed Lionel Barrymore.

For once, the characteristic MGM gloss does not work against the story; you really do feel you are in mid 19th century Paris.

It is perhaps too long, the pacing is sometimes slow, and seeing a Garbo film requires knowing that she never provides "light" entertainment, if that's what you are seeking.

One must also try to put her "legend" status on the back burner to fully appreciate her acting. Of course, it is difficult to ignore the main part of this status, the unearthly perfection of her face, her intense, almost metallic beauty.

Admittedly, I don't think she has great range, but she has no peers at what she does well.

The dying scene is justly famous. It is moving and exquisitely judged, whereas with anyone else, it might have been lachrymose and maudlin. Some have said they actually see the moment when her soul leaves her body! Certainly, it caps for me what is probably my favorite performance in all of filmdom.

CURT LOVES OLDIES: Curt Solash dishes on the best and worst movies of all time
Curt Solash is a retired educator, an antique advertising collector and a lifelong cinemaphile from New York City who now lives in sunny Florida with his handsome life partner.